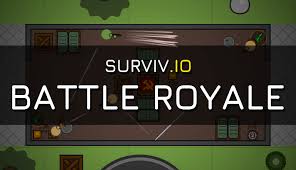 Surviv.io (Survivio) is one of the most popular battle royale .io games in 2019. The battle royale genre was inspired by popular games like Fortnite, Apex Legends, H1Z1, and PUBG. Similar games to Surviv.io ZombsRoyale.io.

Who Needs to Read This Guide?

You might be reading this strategy guide for Surviv.io because you constantly get outplayed by noobs with no weapons hitting you in the face and you miss all of your shots...

This guide is for you.

You will become a better player after this reading this guide (lies).

But this guide will teach you the ways of the potato overlords so you can hit #1 on the leaderboards and post it on social media. 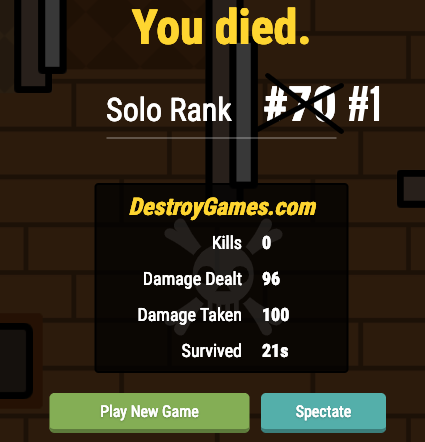 Having the right equipment is the most important factor when trying to win a round of Surviv.io. The only way to get equipment is to eliminate players and scavenge their equips or break boxes or items in buildings. Sometimes you might get lucky, and randomly find equipment out in the open! 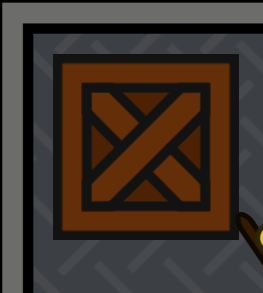 Equipment is divided into 3 different levels (level one, level two, level three). The higher the level the stronger the equip is. You can easily find equips that are level one because they are so common, but level three equips are much more rare.

What to do In the Beginning of a solo match

Your main focus when starting a match of Surviv.io is to quickly find level one equipment as fast as you can. Some spawning locations are better than others. Large buildings are going to have the most competition and your chances of survival are low because someone might have beat you to the good equips.

Everyone wants the good equips. You can find the good equips in large buildings, military bases underground, and the new casino area. These types of places are always filled with players so you might get eliminated quickly. There is always a chance of rare equips dropping from regular boxes.

This guide favor being smart and passive, and only taking risks when necessary. I recommend you avoid large areas of the map and farm on the outskirts.

If you spawn in the outskirts of the map or near it, you can find some small buildings with little competition. Which means you can start getting your basic lv1 gear like body armor, helmet, backpack, and a weapon without being eliminated.

Backpacks allow you to carry more items, specifically more weapon ammo and health consumables. You can tell someone has a backpack equipped when they have a circle behind their character. The color of the backpack will change dependent on what skin you have equipped.

When you defeat another opponent, they automatically drop their backpack on the same location they got eliminated at.

The game will also tell you the exact spot a player died so players can know what areas of the map are more dangerous than others by leaving behind a skull mark on the map.

Backpacks become really important later in the round, because 1v1's will take a lot more ammo and health potions. Players will be equipped with level 2 and level 3 gear which means they can sustain more damage from your bullets. You will need more ammo to eliminate them.

Small Packs are level one backpacks and are commonly found throughout the map. Break furniture in buildings and you will probably get a small pack drop.

Try to not blow up any ovens or you will get insta killed.

Military Packs are level 3 backpacks and allow players to hold an arsenal of weapons, ammo, and health consumables.

Helmets reduce the amount of total headshot damage that is sustained and 30% proportional body damage. Helmets are a must to surviving longer in the royale, and generally make players retreat when they see a player fully geared with a Spetsnaz helmet.

It's okay to retreat!

Helmets can be found in crates especially inside buildings. You can find a lot of helmets near the beach houses and containers near the harbor.

Vests are body armor for players. Vests are a MUST if you want to win a royale. You need the damage reduction because the map can get very chaotic when noobs are using SMGs and they happen to hit you and lower your health.

Vests are divided into three levels with each level being stronger than the previous Vests are perhaps the biggest buff you can get on the map apart from a strong rifle.

Scopes let you see more in the map. Scopes are very underrated, but they are one of the most important items to get especially in a 2D top down shooter like Surviv io. In Fortnite, every player can see giant portions of the map because it is 3D, but that is not the case for Surviv.io.

Scopes are toggle0[ in the backpack, so switch scopes in different battle environments. The rarest scope is x15 and is basically a god-tier item because it lets any person with a sniper kill you from long range distances.

Consumables are items that restore a players health

Without consumables the best players would not win consistently. Watch your health bar at all times making sure you are 100%. Different consumables heal more health and take longer to consume.

The more players there are in the map, the more dangerous it is to consume. Hide behind bushes and buildings that can absorb enemy fire while you consume.

Adrenaline also enables players to go into the red radiation zone for a short amount of time, and loot items dropped by other players while you get to safety.

There are multiple types of weapons, each weapon has its own use cases and a backpack lets you carry multiple weapons. A good tip to live by is knowing what each weapon type does and its strength in the situation you are.

Identify your play style and have fun.

Pistols are one of the most common weapons.

At the start of a round, you will be scavenging for weapons and you will most likely find a pistol quickly.

As the round progresses, players will most likely be equipped with strong helmets and automatic rifles if they are outside.

In otherwords, pistols are generally one of the weakest types of weapons because they simply do not have enough range.

Some players can win the royale with pistols only, but you should be looking for alternative weapons like SMGs to increase your chances of making it to the top.

Some pistols like the Desert Eagle are more rare than others which means they are much stronger than your average M9.

SMGs are generally the next weapon you want to find after a pistol.

Sub machine guns fire extremely fast and can even get noobs a victory in a royale.

Yep if you are noob get the SMG...

Their high fire rate also means their accuracy is low and better players can kill you with assault rifles in most circumstances.

The Vector SMG is perhaps the strongest SMG outside because it has more accuracy and more range than your typical SMG. This makes for a great weapon in mid-game where you can spray foes down outside and around bushes and buildings. The Vector SMG is basically a strong assault rifle that should not be taken lightly.

The MAC-10 SMG is the the strongest inside close-quarter combat (buildings) because it boasts a a fire rate of 22.2 and the spread is insane! It is most effective when you are entering buildings because you can just spray any enemy inside and they will be forced to retreat or take cover somewhere inside. There is no way they can dodge the rapid fire of a MAC-10.

Here is a basic table of SMG stat's, make sure to visit the wiki for more detailed information on every SMG.

Shotguns like in most games, are very powerful. Close-quarter combat the spread of a shotgun can eliminate many players.

Shotguns have very high spread so they are best used inside buildings when players do not know you are there. You don't need perfect aim to kill someone.

Every good player will carry a shotgun at all times because more often than not, you are going to have to use it. Anytime a player thinks of high damage, they think of shotguns.

The strongest shotgun is the Super 90, it is extremely rare but has the most range of all shotgun and any weapon with high damage and long range is a nightmare to deal with.

Assault rifles in Surviv io are the strongest overall weapons in the game. They are particulary useful near the end game where weapon range is critical. They are basically upgraded SMGs that allow players to win royales.

The most common assault rifle you will find is the AK-47 which is probably the weakest of assault rifles, but it is still a stronger weapon than other classes.

The strongest assault rifle is probably the AN-94 which has a weapon spawn of 1 per game... but the FAMAS M4A1-S come very close because they are at about the same strength and the difference will be the skill between players.

Yep it is so rare that you put a big target on your back from other players that always wanted to wield it.

Light machine guns are weapons with a high rate of fire, long range, and large magazines

LMGs major weakness is the amount of movement speed that the player loses while shooting.

Players can easily maneuver their way out of your aim or kill you from behind. This is a huge weakness especially in solo modes. You want to be versatile and move quickly in the early game, so LMGs make sense when there are not so many players left remaining. LMGs also make sense in team modes like firefight where you and your friends can protect each other.

If used correctly, LMGs can be very powerful and are commonly used by the best players especially paired with x4 and x8 scopes.

We all wish there were hacks to Surviv.io but there is not any.

The closest thing to Surviv.io hacks is the super rare map skin that allows you camouflage into the background! It is a low drop rate item that can be found inside special crates inside military bases.

Having the skin will give you a boost by helping you blend into the map, while you can assassinate other players.